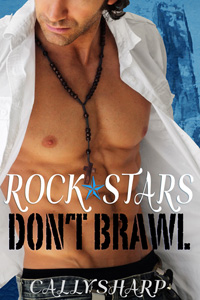 Michael goes to Shortwave’s rock shows down at the Maelstrom partly because he loves the music, but mostly because Shortwave’s frontman is smoking hot. Every gig they play, Tyrell is out there, gleaming bronze under the stage lights and singing in a rough baritone that makes heat pool in Michael’s gut.

Michael’s too shy to say anything- and when their eyes meet over the crowded dance floor, the smouldering hunger Michael sees there must be some kind of mistake.

Michael flees, but the night streets are a dangerous place. When a mugging turns nasty, Michael’s sure he’s about to die- until Tyrell jumps in, bare-fisted, with a wicked grin.

This 6000 word short story contains rough sex, biting, hot rock stars, and a night that Michael’s not ever going to forget.

Cally Sharp hails from the great white north, where there's not a whole lot to do in the winter but pick up a pen. A writer of mostly M/M Erotica and Romance.