The Demon Under his Bed 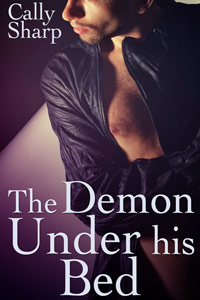 When Stephen Robertson moves into his new house, he thinks it’s the deal of the century. A gorgeous, roomy Victorian home on the edge of a park, trimmed in white. It’s perfect except for one thing.

There’s whispering coming from under the bed.

At first he ignores it, but when it starts addressing him personally, he knows he has a problem. Especially when its promises take a turn for the obscene. It might be a ghost or a demon, but as Stephen is forced to lie there and listen, he’s fighting a losing battle with perverse fascination.

He’s determined not to give up his house so easily, but when his wrist dangles from the bed and something like a long clever tongue wraps around it, things may take a stranger turn than he ever imagined.

Cally Sharp hails from the great white north, where there's not a whole lot to do in the winter but pick up a pen. A writer of mostly M/M Erotica and Romance.